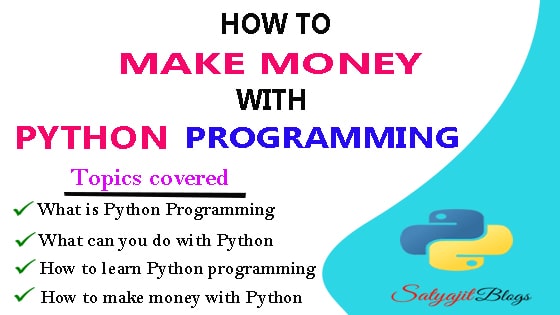 Do you want to know- How to make money with Python Programming?

Don’t worry; this article is made for you.

Now, you might be thinking, a number of other popular programming languages are available in the world than why I am talking about Python Programming.

Scientists, Engineers, developers and Mathematicians love Python because of its simple and elegant syntax.

A Python Developers official annual survey carried out in October 2020 to reveal the current state of the language and the ecosystem around it and the result indicate that 85% of the survey respondents use Python as their main programming language.

Python is also used combine with other programming language by the developer. JavaScript is the top popular language for developers to combine with Python.

Python Programming is made for everyone. You might be:

No matter, who you are?

In this article, I will explain & cover following:

What is Python Programming ?

What can you do with Python Programming ?

There are tons of opportunities available for Python Programmers. If you have good command on Python programming, you can use it for following purposes:

How to learn Python Programming ?

Just like any other computer programming language, Python is working with some basic concepts such as Syntax, variable, data types, operators, loops, control structure, list, strings, modules, input-output, and build in functions.

At present many wonderful resources are available on internet for Python programming; with the help of these resources you can quickly learn Python step by step from zero to hero without leaving your own home or comfort zone.

For beginners, you don’t need to know and learn everything, you can get started with basics of Python programming and everything else will learn along the way while working on projects.

In my point of view, 06 best and free resources for learning Python programming are:

My favourite Python programming instructor is Mosh, he has amazing programming and teaching experience. You can watch Mosh Python for beginners full course here:

How to make money with Python Programming  ?

There are number of ways you can make money with Python programming skills. Most popular ways are:

If you have any question, query or better ideas on how to make money using Python programming, let me inform on comment section below. I will be very glad for this.

How to make money with Web Designing

How to Make Money with Drop Shipping