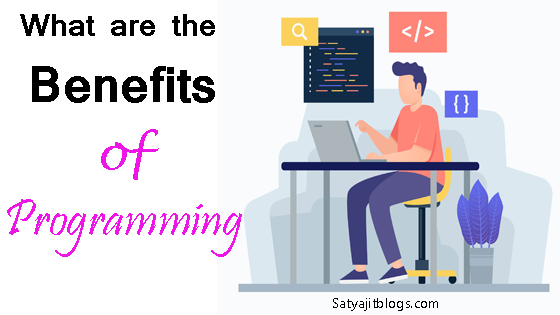 Do you want to learn- what are the benefits of learning computer programming.

Computer programming is playing a great role behind the scene in our lives, it makes our life very easy, better, faster and more connected.

If you want to learn, what are the benefits of learning computer programming, you are in the right place.

In this article, I will give you detailed information about what are the benefits of computer programming. For beginners, you can serve this article as a guide. After reading this article, you will be able to explain :

What is Computer Programming ?

Let me give you an example.

Suppose, two people Ram and Shyam wants to talk with each other.

How they communicate and speak with each other ?

They obviously choose a natural spoken languages (like English, Mandarin, Hindi, Spanish, French, Bengali etc.) to communicate with each others as both are humans.

Computer is a machine do not understand the languages which normally human beings used to communicate with others.

We need a programming language to write a computer program or code (set of instruction) to tell the computer system to perform a specific task.

We all are know that a language is a system of communication. A programming language allow us (human) to communicate with the computer.

Ok, I think now you get a clear idea about what is computer programming.

Now time to move for next topic.

How long does it take to learn computer programming ?

This is a common question that everyone interested in programming wants to know before entering into the programming field.

Actually it is totally depends on your end goals and way of approach.

There are number of branches in computer programming which offers a plethora of opportunities to start your professional career as a programmer.

Before starting to learn programming very first thing you need to choose a niche for your programming.

Ask yourself- What Goals you want to achieve by learning programming ?

Niche plays a vital role in journey of your success in programming.

Ok, let’s jump to next topic.

What ways you choose to learn programming ?

There are several ways to learn computer programming:

Self study : Using free resources available on Internet and Youtube

So, if you want to learn basics of any programming language normally it will take 4 to 5 months.

I had started my programming journey with my college degree i.e. BSc in Information Technology (3 Years) and then continue going on my practice while pursuing PG degree i.e. MCA (3 Years) from SMU.

After completion of my college, I joined in govt job but I didn’t discontinued journey of my programming and continued my practice with self study to expend my knowledge from other experts in programming field with the help of resources available on Internet and Youtube.

I think now you get a clear overview about how much time it will take to learn and master in programming.

Ok, now move to next topic.

As we all are live in a digital age, it is necessary to use technologies in our daily life to live.

All these gadgets and platform totally dependent on software and computer programming.

Programming is in high demand for all time all over the world. There are plenty of job, carrier and earning opportunities if you know programming.

As today’s technology dependent world, it has become necessary for everyone to have programming knowledge skills to stand in crowd.

If you learn computer programming, it will help us to live in the future world we are creating. As technology continues to move to the forefront in our society, jobs requiring programming skills are soaring.

So, if you have programming skills, it will enable you to succeed in the workplace of the future.

Learning programming will increase your problem solving skills and power of imagination. If you serious about it and start practice daily, you will observe it is an exercise  for your brain which will improve your way of thinking, logical ability and problem solving.

If you still confusion about what are the benefits of learning computer programming.

He is founder of most popular and biggest Software Company Microsoft Corporation with his childhood fried Paul Allen. He studied computer science from Harvard University. He is 2nd richest person of the world. He is considered as one of the smartest computer programmers.

Founder and CEO of Facebook. He studied computer science degree from Harvard University. He is 4th richest person of the world.

Co-founder of Google. He is known for inventing the search engine along with Sergey Brin. He studied BSc in Computer Engineering and Master in Computer Science from Standford University. He is 8th richest person of the world.

Creator and developer of Linux Kernel Operating System and created the distributed Control System Git (Open Source) which is used world wide. He studied master in computer from University of Helsinki.

Known as father of the Java programming language. He studied BSc in Computer Science from the University of Calgary.

He is an English Computer Scientist and inventor of the World Wide Web and implemented the first successful communication between a Hypertext Transfer Protocol client and server via the internet. He studied BA in Physics from The Queen’s College, Oxford.

List is not end here. There are so many other successful computer programmers in the world who invented different technologies and platform to make our life very easy, better, faster and more connected.

I hope this article helped you to get a clear idea about what are the benefits of learning programming.

What is HTML | What are the actual use of HTML?