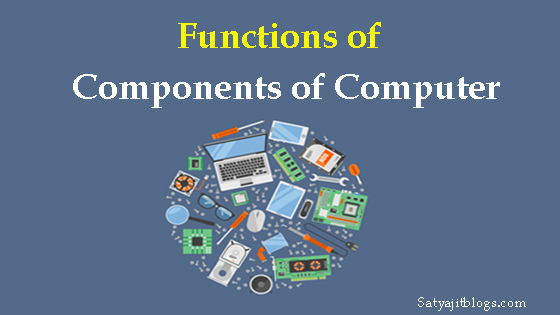 Today we are using computer in everywhere of our life. So, it is very essential for everyone to have the basic knowledge of computer, which ultimately makes your life very simple, easy and more faster.

When, you start using computer, you might be thinking, how this computer (electronic device) works and what are the components are interconnected within the computer and how these components works etc.

Don’t worry, through this article I will give you the detailed information about every components of computer system and their functions.

What is a computer ?

Computer is an electronic device or a machine which capable to accept data from user, store digitized data, perform & process the operation in accordance with a set of instruction and give us the desired results as output.

A computer is defined as a machine for manipulating data according to a list of instructions.

Computer software consists of the instructions and the data that the computer manipulates to perform various data processing tasks.

The hardware of the computer system consists of all the electronic components and electromechanical devices that comprise the physical entity of the device.

Hardware and software are mutually dependent on each other. Hardware and Software both work together to make a computer useful.

A human can’t live without the body and mind. In the same line, hardware and software both are equally important to run the body of computer.

In this article, we will focus only on hardware of the computer system.

A computer system is made in combination of various electronic and hardware components.

To operate any computer, we need CPU, Input Devices & Output Devices. But, normally a computer system means only CPU and all other devices are helping the computer to run effectively.

But, it does not mean, other devices i.e. Input & Output devices are not important. These devices are equally important to run a computer or get the our desire output.

What are the components of Computer System ?

A Computer is made up of a lot of components, however the computer is organized into four units System Unit, Input Devices, Output Devices & Storage Devices.

Main and actual part of computer is CPU and other parts i.e. Input (Keyboard and Mouse), Output (Monitor) are just supporting/ helping parts through which we are input.

In this article, we only focus on discussion of components of System Unit of Computer.

The motherboard is made up of a series of copper layers of Printed Circuit Board (PCB).  Motherboard physically connect all the parts of a computer together and it is responsible for the interaction of all the elements of the computer such as CPU, Memory, hard drives, optical drives, video card, sound card, power supply switch, reset switch & several card slots.

CPU is stands for Central Processing Unit. It is also known as a processor or microprocessor. The CPU is the computational unit and is the heart of computer’s.

The CPU controls the operations of the computer and performs its data processing functions. The CPU is responsible for handling all instructions and calculation it receives from other hardware components in the computer and software programs running on the computer.

ALU is a collection of logic circuits designed to perform all the arithmetic operations (i.e. addition, subtraction, multiplication and division) and logical operations (i.e. not, and, or, and exclusive or).

Registers form the internal memory for CPU and provide storage to the CPU. The register are used to store the data, addresses, and flags that are in use, by the CPU.

CPU interconnections provides means for communication among the control unit, ALU and registers of the CPU.

Basic Tasks of CPU is:

CPU’s process is connected to the Computer motherboard via a CPU Socket.  A CPU socket uses a series of pins.

CPU socket is not soldered and can be replaced. The processor’s specific socket type needs to match the socket type used by the board.

Chipset play a leading role in the design and fabrication of modern personal computers.

A chipset is a group of interdependent chips or integrated circuits on a motherboard that control the flow of data and instructions between the central processing unit.

BIOS stands for Basic Input/ Output System. BIOS is the program a computer’s microprocessor uses to start the computer system after it is powered on.

BIOS is a chip located on all motherboards of computer that contain instructions and setup for how our system should boot and how it operate.

BIOS is to act as a middleman between Operating Systems and the hardware run on it.

CMOS is stands for Complementary Metal-Oxide-Semiconductor. CMOS is used to keep the clock chip running even when power is off.

The CMOS is a memory chip that houses setting configurations and is powered by the onboard battery.

In any computer system, the memory usually refers to the actual hardware device, where the programs, data, operands or the calculations are stored.

Memory is basically divided into a large array of bytes. A byte can hold a small amount of information, such as a single character or a numeric value between 0 and 255.

The Main Memory is the working memory of the CPU. Main memory consists of a large number of semiconductor storage cells.

Main memories are usually built from dynamic IC’s. If the power of computer is lost, the information store and hold in the main memory will be lost.

Main memory is divided into two categories RAM and ROM. RAM stands for Random Access Memory and ROM stands for Read Only Memory.

External memory or secondary memory has the important property which stored the information is not lost when the computer is switched off.

Cache Memory is special memory that operates much faster than other memory of computer. The CPU accesses the memory at least once to fetch the instruction and sometimes again accesses memory to fetch the operands.

Cache memory lies between the microprocessor and the system RAM. Cache memory is used as a buffer to reduce the time of memory access.

Cache memory usually on the computer processor chip and not on the motherboard.

Power supplies play a vital role in the operation of PCs and their peripherals. A Power Supply Unit is an important part of any electric circuit which provides the power to the circuit for a proper operation. All electronic devices require a constant voltage with any fluctuations.

A Power Supply Unit converts main electricity i.e. AC voltage to low voltage (DC voltages) that can be used by electronic, electro-mechanical devices and components of a computer.

Different types of SMPS are AT, ATX, BTX, Micro BTX.

DIMM stands for Dual in Line Memory Module. These are the slots on the motherboard that accept the system’s RAM.

PCI stands for Peripheral Component Interconnect. Every desktop PC motherboard has a number of PCIs slots.

PCIs are the expansion slots on the motherboard that accept video cards, Graphic cards, TV tuners, and other board based components.

24 Pin ATX Power Connector is the main power source for computer system. This is the biggest power cable coming off a desktop Computer power supply. Normally positioned near the DIMM / Ram slots of your PC.

A pair of four pins to which used to connect a chassis fan. The PWM header allows for fine control over fan speeds based on temperature guidelines that are set at a system level.

The CPU Power connector is a dedicated four-pin or eight-pin power connection, usually positioned near the actual CPU socket.

If you have any question about the topic, please let me inform through contact us page or comment section. I will be answered your question, as soon as possible.