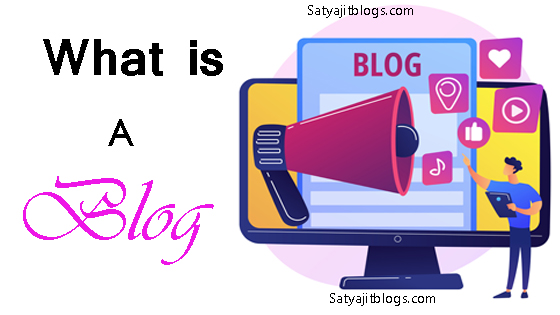 There is no single and general agreed upon definition for Blog.

Blog is used by the different people and organization for different purpose.

We can give the following few expressions in this context.

The first blog was Links.net, created by Justin Hall, is an American journalist and entrepreneur, best known as a pioneer blogger while he was a student at Swarthmore College in 1994.

Justin started his web-based diary Justin’s Links from the underground, which offered one of the earliest guided tours of the web.

Of course, at that time they weren’t called blogs, and he just referred to it as his personal homepage.

Blogs are also known as “web logs” an informational site published on the Internet or World Wide Web. The term “weblog” was coined by Jorn Barger on 17th December 1997.

He is an American blogger, best known as editor of Robot Wisdom, an influential early weblog.

Barger coined the term weblog to describe the process of “logging the weeb” as he browsed.

In 1998 marks the first known instance of a blog on a traditional news site, when Jonathan Dube blogged Hurricane Bonnie for The Charlotte Observer.

“Weblog” was shortened to “blog” in 1999 by programmer Peter Merholz, who jokingly broke the word weblog into the phrase we blog in the sidebar of his blog Peterme.com in April or May 1999.

The history of blogging starts with several digital precursor.

In 1990, Internet forum software, such as WebEx, created running conversations with “threads”. Threads are topical connections between messages on virtual “corkboard”.

The page was accessible by a special button “What’s new” in the Mosaic web browser.

In 1994, Justin Hall is an American who began personal blogging while he was a student at Swarthmore College, who is generally recognized as one of the earlier blogger.

Jerry Pournelle also claimed he was started keeping a Daybook and a daily journal on GE Genie before the term “blog” or “Web log” was invented.

Dave Winer’s Scripting news is also one of the older and longer running weblogs.

In 1994, Wearable Wireless Webcam was another early blog, which online shared diary of a person’s personal life mixing text, digital video, and digital pictures transmitted live from a wearable computer and EyeTap device to a web site.

Since 1996, the Australian Netguide magazine maintained the Daily Net News on their web site.  It ran links and daily reviews of new websites.

In 1997, the term “weblog” was coined by Jorn Barger is an American blogger, best known as editor of Robot Wisdom, an influential early weblog.

The term weblog to describe the process of “logging the web” as he browsed.

In 1998, Bruce Ableson launched “Open Diary“, soon grew to thousands of online diaries which is becoming the first blog community where readers could add comments to other writers’ blog post and entries.

In 1999, Brad Fitzpatrick started “Live Journal“. Andrew Smales created Pitas.com as an easier alternative to maintaining a “news page” on a website, followed by  Diaryland focusing more on a personal diary community.

In February 2003 blogger.com was purchased by Google.

We hope that you have read some useful and helpful information on what is blogging.

Did this post on What is a Blog help you ? Feel free to give your suggestion and comments if any in the comments section below, which gives us to prepare better content for you in next article.

If you are looking for more extensive content and detailed guidelines on blogging, please check out our post on how to start a blog by beginners from scratch.

Also don’t forget to share this article with social platform or other people.

How to make money with Blogging in 2021