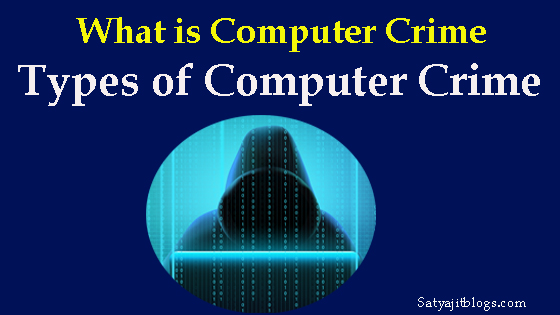 Do you want to know what is computer crime, if your answer is yes, then this post is made for you.

In this article, I will help you to clear your about concepts about computer crime.

Computer is playing a great role in our life, as computer is part of just about everything that touches our lives like education, business, banking, medical diagnosis, communication, entertainment etc.

As we are living in a digital era, it is very essential to have the knowledge about how computers are used in and what are the computer crimes so that we can able to protect our valuable information and prevent the computer crimes.

I think, we all are little bit known about what is Crime ?

Crime is an illegal act for which someone can be punished by the government for the violation of law.

But, here I am going to discuss about the different type of crime, which nothing physically being taken or stolen, i.e. called Computer Crime or Digital Crime or Electronic Crime.

What is Computer Crime ?

Computer crime is an act performed by highly technical and knowledgeable person by the use of computer to steal money, goods, software, companies and individual’s confidential information in unauthorized way.

Computer Crimes can be committed when the computer application process or data are manipulate to accept false or unauthorised transactions.

If computer systems connected to internet, computer criminal can perform crime with absolutely nothing physically being taken or stolen, they can be done at the ease of logging in from home or any other places.

Committing crimes that exploit the computer and the information it contains can be damaging to the reputations, financial loss, loss of credibility, blackmail, disclosure of confidential/ sensitive information and sabotage etc.

Who are Computer Criminals?

Criminals in computer crimes are often the same people who exploit physical exposures, although the skills needed to exploit logical exposures are more technical and complex.

Computer criminals are the individuals or a team of people who use the computer and advance technology to steal the sensitive information of any company or individual through online or digital systems with the intention of generating profit.

What are the different types of Computer Crimes ?

With the advancement of technology, computer criminals are also finding new ways to commit a crime. Common computer crimes are :

If you have any question about the topic, don’t hesitate to send us an email through contact us page or comments in comment section below. We will be answered your question, as soon as possible.

Looking to learn more about Computer Science, you can check out our other articles published in our website, which also listed below for your ready reference:

What is Computer Security and how to protect from attacks

How to choose Blog Niche