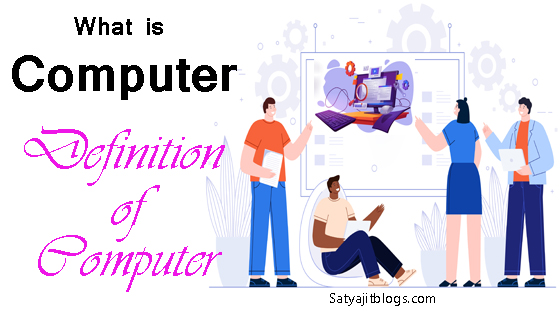 In today’s world, the computer is becoming a household gadget, which combines a TV, a telephone, an answering machine, a fax, a CD player and  internet connection all in one.

Every day, people use computers in new ways. Computer has become part of our day to day life.

We used computer in every fields like education, business, science, in the field of medicine, for domestic purpose, for entertainment etc, list is endless.

So it is very essential for every people to know – what is computer, how to use computer, what are the components of computer and how it works as computer science will be root of future opportunities, challenges and competition.

The word “Computer” is derived from the word “Compute” in 1631. The word Compute means “Calculate”, “to count” “to sum up” or “work out” a figure or amount.

The word “Compute” origin from the Latin word “Computare“. Word computare is combination of two words Com + putare. Com means together and putare means to settle an account.

Computer is an electronic device or machine which capable to accept data from user, store digitized data, perform & process the operation in accordance with a set of instruction and give us the desired results as output.

Computer received instructions or data in the form of computer program (or high level language) through an input device like Keyboard, mouse, CD-ROM, Pen drive, scanner etc and placed it into memory.

Once the data received the CPU perform the operations with the help of other components, 1) Control Unit fetch the data, 2) decode the data, 3) Arithmetic logic unit execute the data and 4) Store the data to memory.

Step-3: Give output and result to worlds

Once the data is ready, computer sent back the data/ information through output device like monitor, printer, projector etc.

In earlier, computer was a job title or given the name to those human beings whose job was to perform the repetitive calculations required to compute such things as navigational tables, tide charts, and planetary positions for  astronomical almanacs.

Scientists and inventors were searching for hundreds of years to find a mechanism that can perform calculations task quickly and accurately then human. Which basically begins the history of computer from gear driven calculating machine to today’s world i.e. Artificial Intelligence.

In 1822, English mathematician Charles Babbage’s designed Difference Engine to calculate the entries of a table automatically and transfer them via steel punches to an engineer’s plate from which the tables could be printed. Because of this invention, he is called father of computer.

Babbage’s Difference Engine was the first machine and an automatic mechanical calculator that could calculate and print mathematical tables.  But, difference engine was can only do one mathematical operation i.e. addition.

The history of computer is considered in terms of generation of computes. Computer generations refers to the specific improvements in computer technology with time. Each new generation, witnessed some changes in the size and functionality of the computer as a result computer became smaller and more advanced than the previous generation.

There  are five prominent generations of the computers which are discussed below.

A computer is a combination of multi parts of machine, which includes input devices, output devices and processing unit, which work together to produce results.

Central Processing Unit, actually it is the brain/ heart of any computer. It is also known as processor or Microprocessor. The CPU is responsible for handling all instructions. CPU has three main components, 1) Arithmetic and Logic Unit(ALU) for manipulating data, 2) Registers for  storing data, and 3) Control Circuits for fetching and executing instructions.

A monitor is the screen on which words, numbers and graphics can be seen. A computer monitor is an output device that displays information in pictorial form. Monitor connected to the CPU via VGA, DVI, HDMI or other connectors.

A keyboard helps us to enter data into the computer. In normal usage, the keyboard is used as a text entry interface for typing text and numbers into a word processor, text editor or any other program. A keyboard is also used to give commands to the computer.

Computer itself is a very big topic, which included number of areas and topics that is:

It is not possible to cover all nuts and bolts of computers in one article. All topics have different syllabus, topics, resources and books. So, I will try to cover all topics, one by one in detailed in different articles.

However, in this article, I have tried to give you a general over view about what is computer and hope you get a clear idea about this topic.

If you want to learn about Blogging, SEO, Digital Marketing, Ecommerce & Web Designing, you can read articles directly from following links:

Why you start a Blog

How to choose Blog Niche