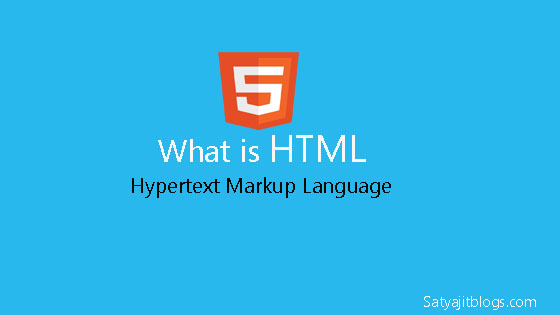 HTML is the simple and powerful language used to describe /written web pages. Do you want to learn what is HTML and what are the actual use of HTML then you are in right place.

HTML is the foundation of all web pages, without HTML we cannot think about the content of any website.

If you interested in blogging, web designing, digital marketing or any kind of Internet activities than knowledge of HTML is very essential for you. Having sound knowledge of HTML, somehow help you everywhere.

This HTML tutorial is developed for everyone beginner and professionals. We will discuss every topic in detailed step-by-step so that anyone can learn and earn deep knowledge of HTML from here in a very easy way. Also if you want to design a stunning own website, you’ll love this tutorial.

If you don’t have any idea about what is HTML.

Please read this article thoroughly, you will obviously get a good knowledge about Hyper Text Markup Language.

I am splitting this article in different sections for better understanding.

Table of contents is also given below, from where you can jump directly to any section as per your choice but I am suggesting to you please read this article thoroughly from start to end.

HTML stands for Hyper Text Markup Language which is widely used for creating web pages. HTML is not a programming language but it is a markup language.

It is the language of Internet, using this language we can create a web site.

HTML is written in the form of HTML elements consisting of tags, enclosed in angle brackets (i.e. < html >) within the content of web page. The contents of each web page are defined by HTML tags.

What is Hyper Text ?

Hypertext refers to the hyperlinks that an HTML page may contain. Hypertext is text which contains links to other texts of web page. So we can simply say that “a text has a link within it, is a hypertext”. Whenever anyone click on that link it will re-direct to a new text or webpage, because that person have clicked on a hypertext. The Ted Nelson originally invented the word “hypertext” for “non-sequential writing” around 1965.

What is Markup Language?

A markup language is a computer language that uses a set of markup tags to define elements within a document and it has no compiler or interpreter. Markup language is human-readable, markup file contain standard words, rather than typical programming syntax (which is written in computer coding/ programming languages).

Sir Timothy John Berners-Lee is an English Engineer and computer scientist had developed his first hypertext system, “Enquire” in 1980 for his personal use.

In 1989, Tim came up with the concept, we could actually link the text in the files themselves. It means, while reading one research paper we could quickly display part of another paper that holds relevant text. This could be done using form of hypertext, linking documents together by using buttons, when we clicked on the buttons jump from one paper to another.

In 1989, Tim Berners-Lee wrote a memo proposing an internet based hypertext system in collaboration with CERN Data Systems Engineer “Robert Caillau” while they worked at CERN. In the last part of 1990, Berners-Lee specified HTML and wrote the browser and server software. HTML is a subset of standard generalized markup language (SGML).

What is HTML Tags ?

HTML has a collection of certain key words called “Tags” that are helpful in writing the documents to be displayed using a browser or Internet.

To display a document in web it is essential to markup the different elements of the documents like headings, paragraphs, tables etc with the help of HTML tags.

HTML Tags are written within the less than signs (<) and greater than signs (>). These signs also known as angle brackets.

What are the different Tags in HTML?

HTML has a number of Tags. The essential tags that are required to create a HTML documents are:

What is HTML Attributes ?

Attributes are special words used inside the opening tag which provide additional information about the elements or attributes. Attributes are a modifier of an HTML element.

HTML attributes are made up of two parts – first part is a name and second part is a value. The ‘name’ is the property you want to set. The ‘value’ is what you want the value of the property to be set, which is always put within the quotations mark.

What are the different Attributes in HTML?

There are number of resources are available on the internet, from where you can learn more about HTML Tags and Attributes.

I hope this article helped you to get a clear idea about what is HTML and what are the actual use of it.

If you found this article somehow help to you, please share this article with others so they can also benefitted from it.

If you have any question, query or better content on this topic, let me inform on comment section below. I will be very glad for this.

Looking to know more about computer programming and web designing. Please check out the articles mentioned below.

Why Algorithm is important in programming