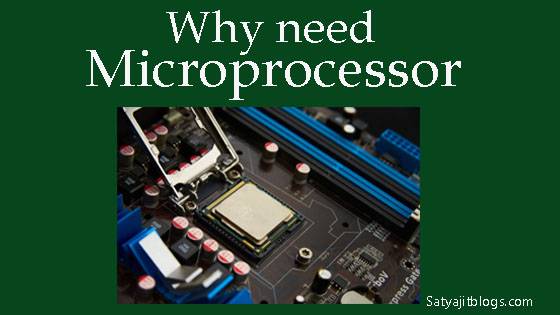 A microprocessor is the brain of computer that incorporates all the functions of CPU on a single integrated circuit (IC) or microchip which accept data/ instruction as input, process the data according to instructions stored in the memory and give us desired output.

A microprocessor is also known as a central processing unit which numbers of peripherals are fabricated on a single chip.

What is Integrated Circuits ?

An Integrated circuit (IC) also known as ‘chip’, which integrates a circuit of several electronic components into a solid block.

An Integrated circuit formed on a small piece of semiconducting material, which performs the same function as a larger circuit made from discrete components.

Why need a Microprocessor in computer ?

A microprocessor is an important part of a computer without which we can’t perform anything on our computer.

To run a human body, we need a brain which controls all the functions of body like thought, memory, emotion, feel, talk, move and much more, without the brain human body is just a statue.

A microprocessor is the brain of computer, through which computer received data, think what to do with these data, process the data according to instruction and give output. So, run a computer, we need microprocessor, without microprocessor we can’t run any computer.

The development of processors began in late 1960s and Intel came out with the first ever Processor 4004 in 1971 which was a 4 bit microprocessor and now we have advanced microprocessors like i3, i5, i7 and i9.

What are the types of Microprocessors?

What are the components of Microprocessor?

The major components of a microprocessor are ALU, Registers, Control Unit, I/O Units  and Cache.

The ALU performs the actual numerical and logic operation such as add, subtract, AND, OR etc. uses data from memory and from accumulator to perform arithmetic.

The Control Unit reads the instructions and generates the necessary digital signals to operate the other components. Provides the required timing and control signals to carry out the different operations within as well as outside CPU.

A processor needs to be able to communicate with the rest of the computer system. This communication occurs through the I/O ports. The I/O ports will interface with the system memory (RAM) and also the other peripheral of a computer.

Cache is memory that is located on the chip but that is not considered registers. The cache is used because reading external memory is very slow and reading a local cache is much faster.

How does a microprocessor works?

A microprocessor is a multipurpose programmable clock driven, register based electronic device that reads binary instruction from a storage device called memory, accept binary data as input and processes data according to those instruction, and provides result as output.

How to make money with software development