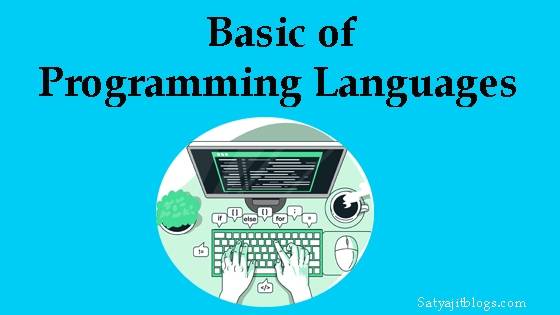 Do you want to learn what is the basic of programming languages, then this article is perfect for you.

We all are well known about the importance of language. A language is a system of communication for human. Without using language we (human) can’t talk with each others.

We are using different natural languages like English, Spanish, French, Hindi, Bengali etc to communicate with other people.

But, computer is a machine and do not understand the natural languages normally human beings used to communicate with others.

That is the why, programming languages comes in picture.

What is a programming language?

A programming language allow us (human) to communicate with the computer.

A programming language consists of all the syntaxes (i.e. grammar or rules of usage) and semantics meaning that permit human / people to communicate with the computer.

What are the types of programming languages ?

High level languages are used for application programming because these are flexible and easy to use.

What is the basic of programming languages ?

Basic elements of any programming languages are:

Character sets of programming languages are made with combination of letters (A-Z), digits(0-9), special characters and white spaces.

Keywords are the set of words & reserved words used in programming languages that have special meanings to the compiler. Meaning and actions of keywords remains fixed throughout the language.

Every programming languages like C, C++, C#, Java, PHP, Python etc have some set of predefined keywords. List of keywords of most popular languages are:

An operator is a symbol in programming language that tells the compiler or interpreter to perform specific mathematical, relational, logical, increment & decrement operations and to produce final result.

In mathematics, we know that a variable is an alphabet or term that represents an unknown number, value, quantity. Data in programming languages are stored in variables.

In programming, a variable is a name given to particular location in the memory of computer and the value stored in a variable can be altered during program execution.

Example of Looping statements are 1) For loop, 2) While loop, 3) Do-while loop

Main advantage of declaration of array is that by using a simple expression we can define large number of variables.

The square brackets [ ] are used to create the array in programming.

Functions provide an easy means to organize the programs into smaller modules and use them again without rewriting all the code.

A function is the collection of expressions that can be called by repeated number of times.  A program can declare and call a function as many times as necessary.

Function is a self contained block of code/ statements that perform a coherent task of some kind.

The term exception denotes an exceptional event. It can be defined as an abnormal event that occurs during program execution and disrupts the normal flow of instruction.

A tree is a nonlinear hierarchical data structure like a tree that consists of nodes connected by edges.

A graph is a kind of data structure that consists of a set of nodes and a set of edges that establish connections between the nodes.

How to learn computer programming ?

As we are living in the digital era, a number of ways and opportunities are available for us to learn computer programming.

This is article is under construction, please visit again to read the complete article.

Why Algorithm is important in programming

Why Data Structures are important in Programming

What is HTML | What are the actual use of HTML?